Recently in some of the automobile article, it was published that electric technology in automobile won’t alone clean out the emission issue. It is right, but transforming technologies is definitely in our hand. Commercial vehicles are majorly used as goods carrier and for commuting passengers in bulk quantity. Almost every commercial is powered by diesel engines, which are major contributor of hazardous emission. So what if we transform this big part of commercial vehicles into an electric transmission, with no change in power and efficiency? 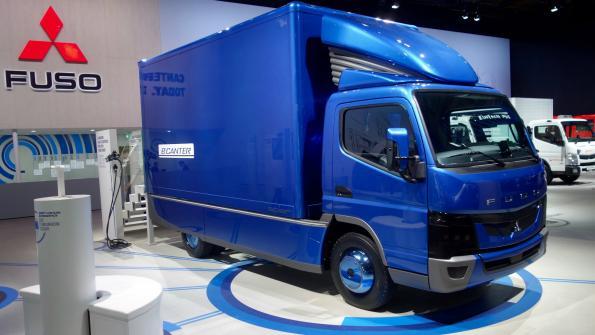 Mitsubishi Fuso Truck and Bus Corporation is following the same technique and initiated the manufacturing of first fully-electric light duty truck, the Fuso eCanter, in the world. The announcement was an event organized at the manufacturing plant located at Tramagal, Portugal. This will be the place where all the eCanters for the U.S. and European markets will be created along with the Fuso eCanter truck. Fuso is the brand operated by Daimler Trucks Asia.

The Fuso eCanter will be produced simultaneously along with the conventional canter light duty truck at Tramagal plant. The vehicle will be equipped with an only electric powertrain, which will be installed in boxes on the assembly line. The customers within the U.S. and Europe will receive their vehicles in next month.

Head of Daimler Trucks Asia and President and CEO of Mitsubishi Fuso Truck, Marc Llistosella, said, “Starting the assembly of the eCanter, we became the first worldwide manufacturer to make a fully electric truck in progression. From this point, we can attend the rising demand for emission free vehicles especially for trucks in developed cities. For this electric truck we have already received orders and we will organize the worldwide introduction of this truck in New York, which the most iconic mega-city.”
Japan based Seven-Eleven Co. Ltd. will be the first commercial purchaser of MFTBC and will be using a fleet of 25 vehicles of new eCanter in this year, declared MFTBC.

Taking the glimpse of the eCanter, the vehicle will have a range of 100 Km and can commute the load of 2–3 Tons, depending on the usage and body. The vehicle is powered by 6-high voltage lithium ion battery packs with 13.8 kWh and 420 V each.

This evolution in the electric drivetrain will drastically effect on the climate change in coming years.