On the grounds where Tesla is ostensibly gearing up to launch its fully electric truck in the next month, the diesel engine manufacturer, Cummins, took away its buzz by revealing a fully electric prototype made by its own.

The Cummins Class 7 Urban Hauler electric truck named as Aeos, which means a mythological Greek horse, has the capability to travel 100 Miles on a single charge, with supplementary batteries extending the range up to 300 Miles.

With a majority of the governments emphasizing to make the emission norms more stringent in coming period, the only solution to that is the deployment of electric trucks and also avoid the hazardous pollution caused due to those huge diesel engines. The design of the battery allows it to sustain the charges for long distance and also reduces the charging time. However, compared to the traditional semi-truck, both the options don’t contest. Tesla indeed can deliver more than that of AEOS, in terms of accomplishing the task precisely for intercity deliveries. Engine maker Cummins brought Rousch, an engineering firm, to assist in designing and developing the prototype.

Cummins though has no intentions to manufacture trucks, but aims to be a prominent supplier of driveline and battery. Like other common electric vehicles, Cummins utilize rolling resistance and regenerative braking, for example, in vehicles such as Volvo XC90 T8 or B-Mode in a Nissan Leaf, to pull out an extra range. Its Class 8 integration, these powertrains deliver flexibility with Agility’s Blue-IQ fuel delivery technology for complete connectivity. 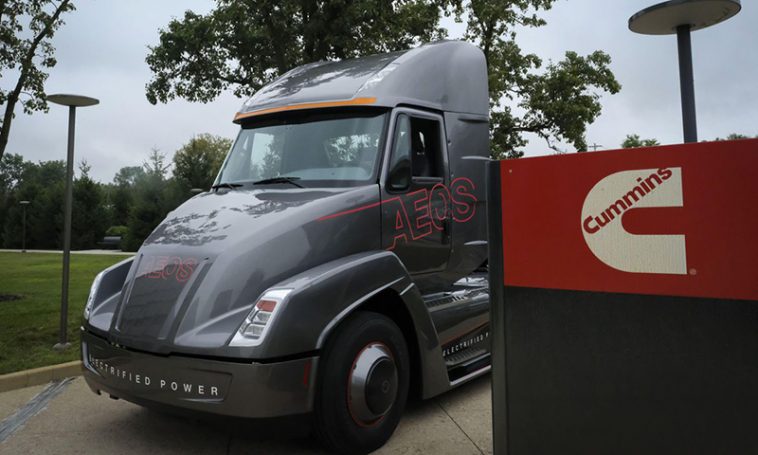 Another critical parameter is the aerodynamic properties, and focusing on the same, the company has effectively modified the side mirrors with cameras to lessen the air drag. The total weight of the electric powertrain is approximately equivalent in terms of transmission, engine, fuel tank, and after treatment. These engines have the capability to reduce the fuel cost that is spent in to drive diesel hybrids with the advantage of emission free.

No matter, who or how the electric technology is applied, the race to be the first maker doesn’t make difference, instead of how well the technology reduces the level of emission around will be interesting to see and appreciate.